Hey guys!
It’s time for my thoughts on the final installment in Rick Riordan’s series on Egyptian mythology. Let’s talk about The Serpent’s Shadow, the third book of the Kane Chronicles! 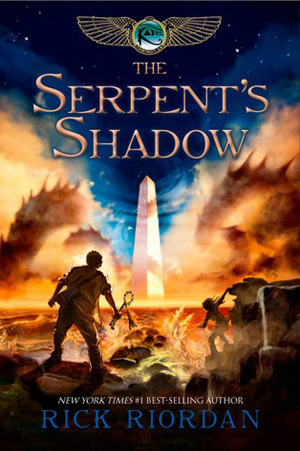 The Serpent’s Shadow by Rick Riordan (Cover from Goodreads)

The Plot:
After all the traumatic events of the last book, the fight is still far from over. Not only is everybody gearing up for the final battle against Apophis, the chaos snake. Even the House of Life itself stands divided and the Gods can decide which side to support. Some of the most powerful humans and Gods would rather fight the Kanes than believe in the real threat. Sadie and Carter have their hands full. Will the teenagers be able to navigate through all this?

The Rating:
This series was hell of a ride! I loved the first two parts and The Serpent’s Shadow was far from a letdown.
Rick Riordan created a fast-paced end with lots of twist and turns for the last novel of the Kane Chronicles. Right up until the final chapters you won’t be able to tell who will survive or whether the world will be destroyed.
As I’ve mentioned before, I enjoyed how Riordan constructed the story and told it from two different points of view. It makes for an interesting flow that feels quite unique.
To be honest, there’s not much to say, that I haven’t mentioned before. The Serpent’s Shadow is a thrilling book with lots of amiable heroes and impressive antagonists. Nothing is ever exclusively black or white and Riordan is great with character development. You might not expect it from a YA novel, but his stories always have several dimensions and there’s more to it than you’d think at first glance. He never ceases to impress me with his knowledge about mythology from different times and areas. I’ve never seen anyone transfer ancient tales to the modern world with such ease and in such a convincing way.

The Serpent’s Shadow is a worthy end to another great series of books by Rick Riordan!