Hello my lovely readers!
Today I want to talk about a novel every woman out there should read. You may know the Amazon show Good Girls Revolt. What you may not know is that it’s based on real events. Lynn Povich experienced it all first hand and shares her insights! 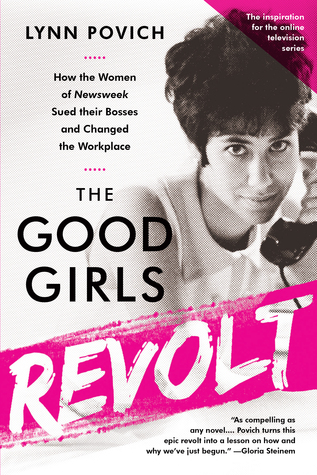 The Plot:
It’s 1969 and the female employees of Newsweek magazine are about to write history. The women filed a lawsuit against their employers as they were discriminated and treated unequally based on their gender. But the fight is far from over…

The Rating:
I hardly ever pick up non-fiction books, but when it comes to The Good Girls Revolt, I felt it was a book I simply had to read.
First of all, I was deeply impressed by the women of Newsweek standing up for their rights in a time when equality was even further away than it is now. They made an important step for all women to come after them. It certainly was a wake-up call for their employers and many others out there.
Lynn Povich chronicles the time building up to the lawsuit, but more importantly the things that changed afterwards – and those that didn’t. We get a thorough insight in what it was like to be a working woman in the 1960’s and 1970’s and what kind of challenges they had to face.
Reading the book, I was humbled by all the achievements and success story that came from the hard work.
But mostly, the it made me sad. Despite the lawsuit (and many other female employees throughout the USA joining in) almost nothing changed. Moreover, when little adjustment were made, it was mostly for show and no real effect was discernible. I can feel the women’s anger which makes them even more relatable.
But what left the deepest impression with me are the two chapters about women at Newsweek today. It hits you like a rock when they all realize that after all this time things are still almost the same.

Lynn Povich not only chronicled the fight against inequality back in the day. She wrote a gentle reminder to always stand up for your rights. And most importantly: she shows us that the fight is still far from over.